Eyebrows play a role in defining the contours of the face and are associated with beauty. A brow lift can reverse the effect of aging and restore beauty. DefinisseTM threads are a range of absorbable, monofilament, suspension barbed threads of synthetic origin to be used when tissue support is required. DefinisseTM threads interact with the tissues with a double action. Namely, a lifting action for the support and repositioning of the tissues, due to the mechanical action and revitalizing action due to the fibrosis that appears along the thread. Individual perceptions and expectations also differ from person to person. The experience with the shaping of eyebrows using DefinisseTM threads is profiled. Eyebrow lift with DefinisseTM threads is a safe, new approach to reshaping eyebrows and improving beauty and confidence.

Facial aesthetics have been defined by artists such as Leonardo da Vinci. In facial expression and beauty, the upper third of the face is considered to be of primary importance. The brow is known as the master line of the face, and it is used as a reference for all other angles and contours of the face.

Eyebrows play a role in defining the contours of the face and are associated with beauty. Eyebrows are also known to mirror emotions like anger (flat eyebrows with central furrows), sadness (downward slanting eyebrows), surprise (high raising eyebrows ), and happiness (proper arches of the eyebrows). Aging is associated with eyebrow ptosis or drooping of the eyebrows, due to gravitational aging. The lateral brow is the most commonly affected. However, the medial eyebrow can also be affected due to atrophy of the eyebrow fat [1]. 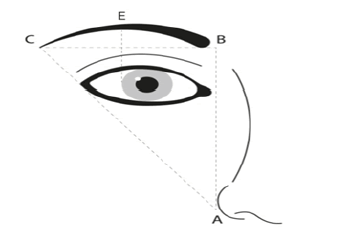 • The medial brow should begin on the same vertical plane as the lateral extent of the ala and the inner canthus (A-B).

• The medial brow ends laterally (C) at an oblique line drawn from the most lateral point of the ala (A) through the lateral canthus.

• The medial and lateral ends of the brow (B, C) lie approximately at the same horizontal level.

• The apex lies on a vertical line (D-E) directly above the lateral limbus.

The Role of Eyebrow Lift in Enhancing Beauty

A brow lift can help to enhance the arch of the eyebrows, and reverse the changes associated with aging by restoring the distance between the eyelid margin and eyebrows. It can reverse the effect of aging and restore beauty.

DefinisseTM threads interact with the tissues with a double-action [4]. Namely, a lifting action for the support and repositioning of the tissues, due to the mechanical action and revitalizing action due to the fibrosis that appears along the thread [4,5].

The barbs of DefinisseTM threads have a specific density specially designed to obtain a mechanical, intense, and continuous stimulation of the fibroblasts that is homogeneous throughout the length of the thread. The barbs of DefinisseTM threads have a defined three-dimensional geometry to achieve effective anchoring without causing tissue trauma (Figure 1). Due to this specific geometry, barbs can be opened like an umbrella after positioning to form a support structure that lifts sagging skin (Savoia A). The bidirectional convergent barbed thread determines traction in the opposite directions due to the disposition of the barbs. The effect of the threads after insertion is a lifting of soft tissue. The DefinisseTM 12-cm Double Needle Threads, used with the Eyebrow Reshaping (ER) Technique, allow the elevation of the tail of the eyebrow (Figures 2 and 3).

The Procedure for the Usage of DefinisseTM Threads to Uplift Eyebrows

Choosing the appropriate candidate: The candidates for best results with the use of DefinisseTM threads have been identified (Table 1).

The next step is to choose and plan the appropriate treatment which must be individualized based on the classification of the eyebrow type (Figure 4).

Performing the procedure in operating theaters or ambulatory clinics. After disinfecting the area of the skin to be treated with an antiseptic solution, the procedure is generally performed under anesthesia (i.e. lidocaine 1%-2% with epinephrine 1:100,000) with/or the addition of a local anesthetic cream. Differences Between Asian and Western Eyebrows

Asian brows are unique in that the hair can often grow in multiple different directions. They also tend to lack a defined arch. Asian eyebrows are often similar to hair color. They have a relatively straighter bow shape than Western’s angular arch signature and have softer brow lines.

In contrast, the Western (American) Brows are often darker than hair and have significantly angular arches and solid, defined shapes (Figures 6 and 7).

Figure 7: The correct layer of insertion is the supra periosteal plane.

Thread implantation is performed meticulously (Figure 8). The thread path is massaged softly from bottom to top to open the barbs The ends of the thread are cut and sterile strips are applied. The same procedure on the opposite side eyebrow. Depicted below are the before and after images of the Asian patients who underwent eyebrow reshaping (Figures 9 and 10). 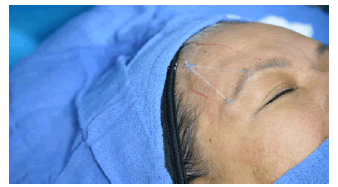 Figure 10: Patient before and after ER technique with definisseTM double-needle 12 cm on Asian patient.

Post-procedure pain can be managed by paracetamol, short-term antibiotic therapy is given and the set of instructions to be followed by the patient are explained to the patient (Table 2) and (Figure 11).

Figure 11: Patient 2; Patient before and after: ER Technique with DefinisseTM.

• The entry point should be placed in the trickle area or hairline as if there is dimpling it can be concealed by the hairline. The ideal exit point would be one that does not involve too much maneuvering

Eyebrows definitely have a role to play in facial aesthetics. Individual perceptions and expectations also differ from person to person. Eyebrow lift with DefinisseTM threads is a safe, new approach to reshaping eyebrows and improving beauty and confidence.