Intervention: 20 subjects in the Group 1 received Core muscle release technique with low level laser therapy before and after-test and 20 subjects in Group 2 received Conventional Physical therapy and Low level laser therapy with before and after -test. Outcome measure: Numeric pain rating scale (NPRS), The Roland-Morris Low Back Pain and Disability Questionnaire (RMDQ), Active Lumbar range of movements like (Flexion, Extension, side flexion to right and left)

Conclusion: Core muscle release technique with LLLT has significant result in the reduction of pain and functional activity in Mechanical Low back pain patients.

Low Back Pain (LBP) causes a significant level of discomfort to perform the activities of daily living and it produces a marked level of disability. Low back pain occurs mostly in thoracolumbar, lumbar, or lumbosacral region [1]. However, the manifestations and limited functional activities are present in many limitations recur in many instance. Mechanical low back pain is majorly caused by, repetitive strain injury or Trunk muscle weakness [2,3]. Recruiting the core muscles will helps to maintain the position and stabilizing the lumbar region of spine. In many cases, no medical related conditions can be found for their back complaints and therefore no definitive diagnosis are there to diagnose as “nonspecific” low back pain.

LBP is fifth most common conditions for visiting the physician, which affects nearly 60- 80% of people throughout their lifetime. LBP the life time prevalence reported very highly as 84% and the chronic LBP prevalence is 23%, with 11-12% of the population having restricted activities by low back pain (LBP) [4].

Mechanical LBP or non-specific low back pain is caused by mechanical reasons and it is not no way related to any condition like contagion, Tumor, and Injury. Chronic LBP is mostly caused by nociceptive, pathology to nervous system, or emotional processes, or a combination of these. LBP is neither a disease nor a diagnostic entity. The term refers to pain of variable duration in an area of the anatomy afflicted so often that it is has become a paradigm of responses to external and internal stimuli.

The Relative Frequency and prevalence of LBP are roughly equal to all over the world wherever collecting the metadata. But in such cases Pain ranks high (often first) and this leads to cause of physical and mental unfitness and finds difficult to carried out the activities and this affecting the quality of life and this is main reason going for medical consultation. In many mortification, however, the cause is not clearly understood, and only very few cases have a direct connections with medical conditions.

Now a day’s Fitness and exercises are developing well and it incorporating into the core stability programme to obliterate the pain thereby improving movements of the particular segments and increasing the muscle strength. Recently the motor control concept has been integrated into core stability. Core muscle therapeutic methods are based on; core stability exercises it builds well-proportioned muscles. It can easily performed by anyone without being constrained necessity of particular tools and equipment to correct misalignment [5,6].

Core Muscle Release technique is a movement practice that cogitate on Breathing, Bony alignment, Joint articulation, Muscle relaxation, and also using the gravity and momentum to facilitate the efficient movement [7,8]. Core Muscle Release techniques can be seen in all types of dance and also find the therapeutic application such as Feldenkrais and Alexander technique, and in yoga and martial arts [7,8]. Low Level Laser therapy (LLLT) is an effective modality for treatment of Orthopedic conditions through its Pain relieving, muscle relaxants, tissue healing and biophysical effects.

This study received institutional ethical approval from SRM College of Physiotherapy, SRM University. Authorization received from accepted hospitals to use the medical records of the subjects. And all participants provided informed written consent.

• Inclusion criteria were: Age group 20- 40 years. Individual who have not been sought physiotherapy treatment following Mechanical LBP. Individual having Mechanical LBP who would be willing for the study, Male subjects, Numeric pain Rating Scale 4-7 [9]. Exclusion criteria were: Patients with Spinal injury and surgery, Lumbar intervertebral disc prolapse, Spinal stenosis, Patients with Neurological problems, Systemic and psychiatric illness, Degenerative changes. Patients who are referred to Physiotherapy Outpatient department for Low back pain are screened for possible inclusion criteria. The subjects were explained about the study and written consent form was obtained. A group of 40 cases with a history of non specific Low back pain were selected conveniently and divided them into two groups as Group-1 and Group-2. All these subjects are recruited according to inclusion criteria and exclusion criteria. At each session the Group- 1 received the core muscle release technique and low level laser therapy [10-12]. Group-2 received the conventional Physical therapy and low level laser therapy.

The procedure is repeated for 5 days per week for 2 weeks for Group-1 and Group-2. The treatment, either core muscle release technique and LLLT alone or LLLT with conventional therapy, is applied to the affected side.

Before-test and after-test result of The NPRS, Roland-Morris Low Back Pain and Disability Questionnaire (RMDQ), Lumbar range of motion is taken for Group-1 and Group-2.

• Core muscle release technique: The starting Position of the subjects should lie comfortably in supine position and both the foot has to be flat on the couch [13] and the legs are wide apart as the hip and knee joints were flexed 45°.

• Diaphragm muscle core release technique: The patient is made to lie comfortable. Therapist has to place the hand alternatively one over the thoracolumbar junction and other hand over the anterioinferior aspects of xiphisternum and the rib. Therapist has to give compression lightly by using both hands simultaneously [14-16].

Compression has to maintain for three to five minutes.

• The rectus abdominis and transverse abdominis: Therapist has to place the hand on both sides of umbilicus, and instruct the patients to take a deep breath through the nose .Then compressed the elevated abdomen therapist has to give compression by using both the hands while the subjects exhale slowly. The same procedure was repeated for five times.

• The quadratus lumborum and erector spinae: The patient was made to lie comfortable. The technique was performed in the posterior region.

• Conventional exercises: The exercise was taught by the physiotherapist and subjects are requested to continue at home. Strengthening, stretching, coordination, stabilization exercises for trunk muscle, pelvic and lower limb. These exercises were carried out easily at home without using any weights and particular equipments. And therapist will ensure the subjects are doing exercises correctly [17-20].

• Laser and parameters: Laser was applied with scanning method, given over the paraspinal muscles of right and left side for 10-15 mins for 2 weeks. Power 100 mv, mode-continuous, 12 joules/cm2.

The details collected from the Numeric Pain Rating Scale (NPRS), RMDQ, Lumbar range of motion (ROM), is taken was entered in MS-Excel sheet and The data was analyzed using statistical package for social science (SPSS) to present the findings of “The Efficacy of Core Muscle Release Technique in Patients with Mechanical Low Back Pain”. Mean, standard deviation, and 95% confidence intervals for each outcome measure are presented [12]. The significance was set at α=0.05 level (two tailed). Paired t-test was done.

Table 1: Before and after test mean values of Group-1.

Table 2: Before and after test mean values of Group-2.

Table 3: Cumulative test mean values of both the groups. 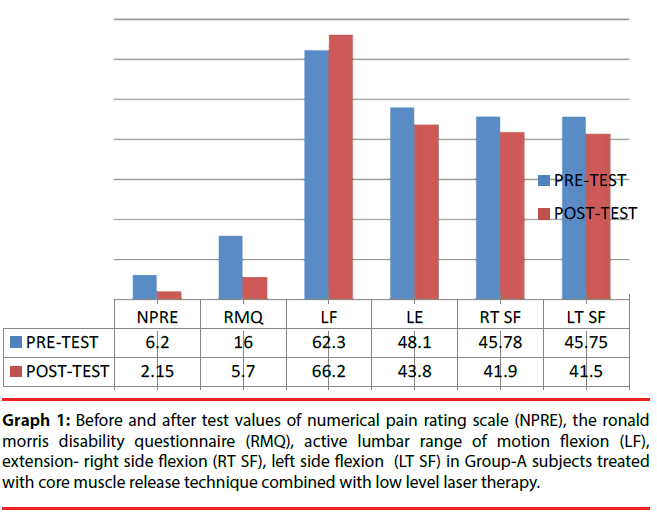 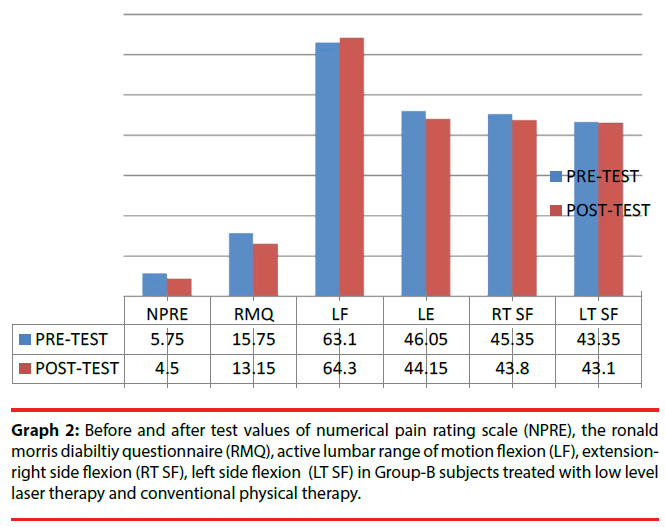 The main aim of treating the LBP is to bring back the normal activities of daily living by using the recent trends of fitness and exercise protocol. Improvement in pain and Range of Motion (ROM) is main aim of the treating subjects with mechanical LBP. Research into mechanical low back pain has largely investigated physical therapy modalities including exercise; Much less emphasis has been placed on core muscle release technique.

The current study compared the effectiveness of Core muscle release technique with LLLT and the Conventional physical therapy with LLLT for the management of mechanical LBP. From results of this study shows that the addition of Core muscle release technique to a low level laser therapy protocol results in good outcomes in shorter duration, with comparing the conventional physical therapy with Low level laser therapy, in the treatment of individuals with mechanical LBP. The collected data from the present study shows that statistically significant in both groups in the functional activities and pain. These findings indicating that there is a significant difference between both the groups at p value less than 0.005.

The Core muscle Release Technique main elements is respiration. It works on diaphragm muscle and it increases the intra abdominal pressure and this helps to maintain the alignment of spine and it improve the core muscle stability globally and locally. The diaphragm muscle dysfunction gives escalate more compression on the spine [17]. Therefore, breathing exercises is most important factor in core stability exercises.

In the Core muscle Release Technique, to strengthen the Transverse abdominis and multifidus muscles and diaphragm ask the subjects to tuck the abdomen inwards during compression. Core muscle imbalance leads to changes in tone of a muscle and also due to repetitive strain injury will reduce the efficient function of the muscle this beacon develops compensatory movements.

Core Release Technique helps subjects to understand the abnormal movements and correcting the changes. Core muscle Release Technique helps to controls the unbalanced muscle and enhancing smooth coordinated contraction between the core muscles when the body movement, Core muscle Release Technique can be effective for relearning proper movements. Biomechanically the inspiration will cater the forward activation of transverse abdominis before to body movement, correcting the imbalanced muscles of transverse abdominis recruitment can be done by respiratory therapy. And it helps to improve the stability of lumbar region [21]. Since Core muscle Release Technique facilitating the flexibility and controlling the stretching and thereby maintaining the tone of the muscle and inducing the smooth movements of joints. It is very efficacious for correcting the malalignment and pain reduction. It is proved that the low level laser therapy is able to reduce pain and improve function in patients with patellar tendinopathy. This wavelength (808 nm) and this power have been identified the clinically effective for musculoskeletal conditions. In addition (808nm) is within the Infrared spectrum and Infrared radiation penetrates tissue particularly well. Thus LASER increases the blood circulation and enhances the erection of lactate or inflammatory substances and facilitates secretion of endogenous opiates that reduces the pain significantly.

LLLT and conventional physiotherapy exercise will decrease pain, and improve the functional activities more than a long term exercises protocol. According a recent published summary of research is focusing the management of low back pain, it seems that exercise therapy and holistic approaches (such as back school and functional restoration) can be considered beneficial.

The rationale for the use of laser therapy as an adjuvant treatment for chronic low back pain stems from its beneficial effects on the pain reduction and inflammation process without any significant complication. This study shows Core muscle release technique with LLLT resulted in a significant reduction in pain and markedly increased the physical function in patients with Mechanical low back pain.

The physiology behind the improvement in pain levels is that LASER irradiation affects the cellular metabolism, protein synthesis, wound healing, and the immune response in order to improve the speed of healing of soft tissues injuries and decreases pain levels. Hence there was a significant reduction n in pain in these subjects post management of LASER.

But on Comparing both the groups, there is significant difference between after-test measures of Group-1 subjects treated with Core muscle release technique with low level laser therapy and Group 2 subjects treated with conventional physical therapy with low level laser therapy. The study showed statistically significant improvement in pain and function in low back pain in both the groups. But comparing both the Groups after values of the Group-1 is significantly improved than Group-2. Hence, the results show that the Group-1 is yielded statistically more improved than Group-2.

With all the physiology explained in the study demonstrates that Core muscle release technique with LLLT improvements in mechanical LBP than conventional physical therapy with low level laser therapy.